Some of the last moments of COP26, ending on Saturday, were hard to watch. While it does no good to fall into the trap of pinning the entirety of our hopes on an extremely messy and deeply inequitable international process, the narrative of this COP as the “last, best hope” was strong.

In many ways, it was discouraging to see where we landed – in effect kicking the ball down the road for another year and largely failing from the perspective of global fairness. And, as we witness or experience yet another disaster in British Columbia this year, alongside so many genuine catastrophes facing people in Canada, especially those in the North, and around the world, we need to ask ourselves:

What does this mean for us at CAPE?

Firstly, there is much to be celebrated from a health systems perspective. 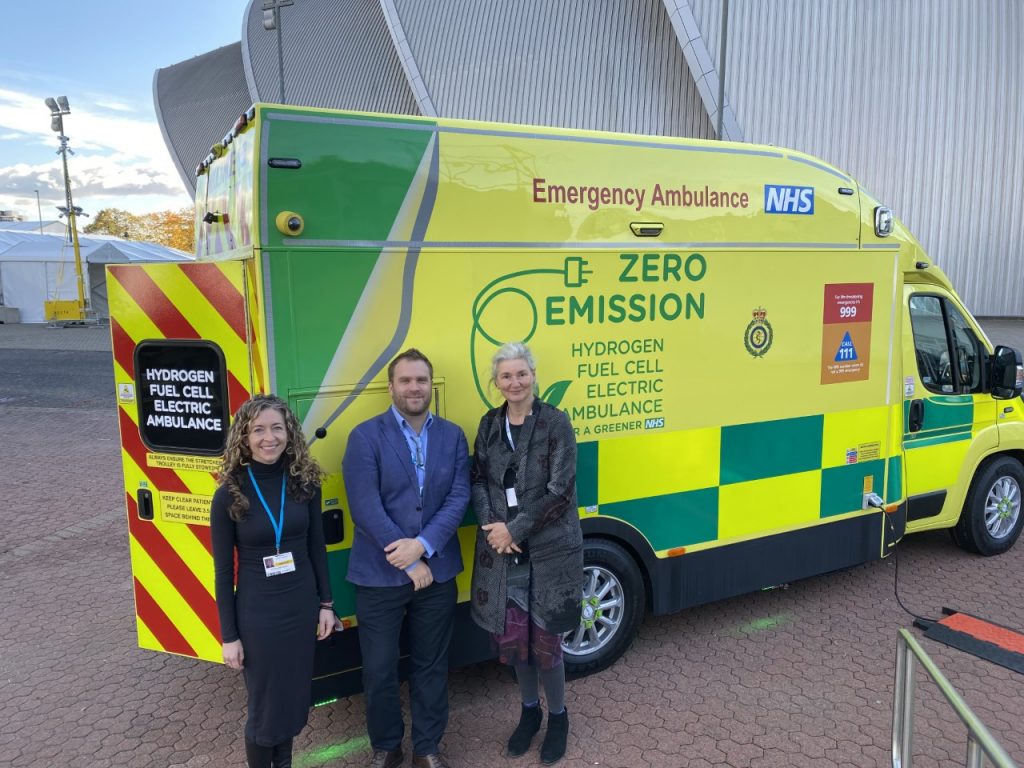 “The international energy within the health sector around resilient low-carbon healthcare was palpable, from the NHS’ new Hydrogen-electric ambulance, to the over 50 countries that have now signed on. As Dr. Watts said in a speech earlier this week, it feels as though we are entering a new phase of work in climate change and health—one where decarbonization is inevitable.”

As Courtney discussed last weekend on CBC’s What on Earth, and with much credit to our colleagues at the Global Climate and Health Alliance and the World Health Organization, the health conversation was more prominent at COP26 than at any of the previous 25 conferences. And with credit to you, CAPE community, alongside many other partners in the health sector in Canada, Canada went from being largely unaware of the WHO COP26 Health Programme to signing it within just a few days. We are now committed to low-carbon, resilient health systems.

Secondly, it is clearer than ever that what we make politically feasible or even inevitable at home the other 50 weeks of the year is what matters in the two weeks our political leaders spend at COP. It seems, for example, that Minister Guilbeault does not currently believe we need to strengthen our emissions targets going into next year’s conference. Canada, which has failed to reduce its emissions at all over the past ten years, is claiming that its plans are already sufficient.

We know this isn’t the case, and we need to change the narrative around our continued reliance on fossil fuels as inevitable. One way we are taking this up at CAPE is through our soon-to-launch campaign to end fossil fuel advertising where we are making the case that the combustion of fossil fuels is just as dangerous to health as cigarettes and, hence, ads promoting these activities need to be similarly regulated. We are involved in planning a summit around justice and transition for workers and Indigenous peoples with our colleagues at Climate Action Network, we are part of a new adaptation-focused coalition, and we will work with you to exert pressure federally on Members of Parliament and key ministers to increase Canada’s climate responsibility. If you aren’t already, we also encourage you to engage with your regional committee – a great deal of excellent work is being done at the provincial and municipal level.

COP26 did not get us where we needed to go – but it never was going to. The work that makes change possible at COP happens at home. We’re glad to be in it with you, now and into the future.

P.S. Do you know any former winter Olympians who might be willing to speak out about fossil fuel sponsorship of sports? Let us know!


You can unsubscribe at any time.