On the day after the Senate ENEV Committee completed its clause-by-clause study of Bill S-5, Senator Rosa Galvez tweeted an important question that foreshadows the next stages of the Bill in its journey to becoming law. Galvez asked: “Which arguments will prevail?” 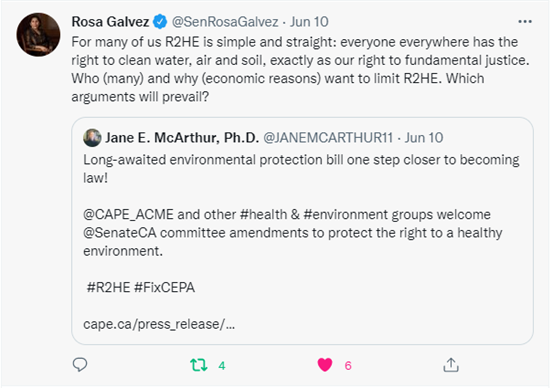 Galvez’s question reflects concern about language in Bill S-5 that would balance – or qualify – the implementation of the right to a healthy environment, including consideration of economic factors in the application of the right. She and some of her committee colleagues strongly challenged the balancing language, arguing for the removal of factors that would qualify the right and advocating for changes that would protect the right in and of itself, among other critical strengthening amendments to the Bill. The role of these Senators, and soon the members of the House, is a high-stakes one.

The long-awaited and campaigned-for reformation of the Canadian Environmental Protection Act, 1999 (CEPA) moved forward with the introduction of Bill S-5: Strengthening Environmental Protection for a Healthier Canada Act, introduced in the Senate in February 2022.  It is crucial that this outdated law is reformed to reflect the realities in Canada of all peoples and their environments (see links below for documents that provide insight and explanation for proposed amendments).

In her powerful and compelling expert witness appearance before the Senate Committee on May 12, 2022, CAPE Board Member Dr. Ojistoh Horn testified that: “As a grassroots Indigenous physician working in my community, I realize the long-term effects of persistent toxins in the land, water, air, soils, fish, plants, and wildlife around our homes…Let us all work together, each doing our specific roles, to fulfill our collective responsibility to the future.”

Senators called on Dr. Horn to answer several questions, and subsequent witnesses and Senators referenced her testimony and the critical points she made regarding the connections between the health of Indigenous people, communities and lands, and gaps under CEPA.

Dr. Horn’s and CAPE’s messaging undoubtedly influenced the arguments and votes made by Senators as they proposed and passed strengthening amendments to Bill S-5. It is evidence indeed of ENGOs and decision-makers working together for positive change! 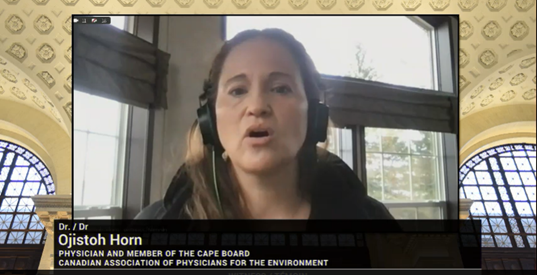 The track of this Bill is unusual, having been introduced in the Senate instead of the House. Senators are not typically lobbied nor are they significant targets of government relations strategies. But CAPE and our ENGO partners focused on the Senate in our messaging on how Bill S-5 needed to be strengthened in a letter to Bill S-5 sponsor Dr. Stan Kutcher, a joint submission to the Senate Standing Committee, a joint press release, and emails and meetings with Senators and their staff. We aimed to find common ground with those who would champion the needed modifications.

To reach the public with the hopes that they too would signal support for a strengthened Bill S-5, CAPE partnered on three published opinion pieces: A prescription from health professionals: strengthen Canada’s toxics law,  and A rights-based approach can address environmental threats to Canadians and Let’s improve environmental justice.

Our advocacy has made a difference. This month, Bill S-5 cleared its first major hurdle in the Senate as the ENEV Committee completed its review and voted to strengthen it before returning it to the full Senate. In a public statement with our ENGO allies, we applauded efforts by Senators Rosa Galvez, Mary Jane McCallum, Julie Miville-Dechêne, and Stan Kutcher for advancing amendments to strengthen provisions on the right to a healthy environment and regulating chemicals of highest concern. We also noted that several committee members, including Senators McCallum and Arnot, crucially spoke about the importance of upholding the United Nations Declaration on the Rights of Indigenous Peoples to prevent pollution impacts on human health and the environment and gaps in CEPA that impact Indigenous peoples and lands.

None of this work is possible without the support of the CAPE community. We know that you – our supporters and donors – are working with us and want to see success in furthering planetary and human health protection and environmental justice. For example, we know that for donors like Brynn, CAPE’s combination of messaging on the environment and a spotlight on the needed changes for human health for illness prevention are what makes our advocacy for CEPA Reform worth supporting.

Our work is yet not done. Bill S-5 returns soon to the full Senate for further debate, and a final vote – a “yea” vote will refer it to the House of Commons. The Senate and the House must approve a bill before it becomes law. The CAPE community is encouraged to continue to advocate for a strengthened Bill S-5,including signing David Suzuki Foundation’s petition, and calls to action will be forthcoming as the Bill progresses to the House of Commons.

In your thinking about the message you want to send as you take action for illness prevention, health promotion and environmental protection through CEPA reform, keep the words of Senator Miville-Dechêne in mind:

“It’s about an approach to pollution. Do we want to tackle pollution at the source through prevention and substitution of toxic substances, or do we want to deal with it later through containing or mitigation measures?”

And, be emboldened by the words of Senator McCallum, who called out the harsh realities of a right balanced with economic factors:

“…one of the problems we have when you’re going to balance regional employment benefit over the toxicity – because that is what has been the major reason for some of the toxicity that First Nations have to live under – that they’re considering employment of other people instead of mitigating what exists already.”

Strengthening the right to a healthy environment and other amendments to Bill S-5 approved by the Senate ENEV Committee are key to getting to a place where human and planetary health are prioritized and better protected under law in Canada. We celebrate these steps forward and are eager to see further improvements to CEPA in the House – our health depends on it.

Join the CAPE Regional Committee in your area